Posted on July 18, 2015 by Greg Cohen under Uncategorized

Back in Vegas, baby!

I am lucky enough to have two jobs — in a row — in Las Vegas.  And, it being July, it is hot as hot can be out there.  I’ve been getting out most mornings, when it is a very nice 70° or so, but by the evening it’s well over 100°.  I’ve been hitting the treadmill in the evening, which has been fine, as I’m watching The Good Wife, which it turns out isn’t a chick-flick at all.  It’s like Law and Order but with better eyebrows.

But I knew I needed more, and thought about spinning.  I’ve been to tons of spin classes at my local gyms, but never to a stand-alone studio.  I was thinking this would be a good chance to go to a Soul Cycle.  I’d heard the hype.  Why not try it where no one could ever see me?  Well, it didn’t quite work out how I thought it would.

I did find an awesome place called Cyclone Cycling.  Although I have nothing to compare it to, I thought it was great.  The first class is only $10, cheap!

I wound up bringing two colleagues with me, so there was no anonymity for me.  They both had spun a lot more than I had, but it was a blast.  The glass was a real workout, 45 minutes and I would totally do it again.  A lot of it was under blacklight, so that was cool.  I really loved the class, and felt like I got a great workout.  There’s something about being in the dark that makes it a little easier to not feel like dork as I bounced up and down on my bike gasping for air.

It was a great cross training adventure, and it got me out of the heat and off the treadmill! 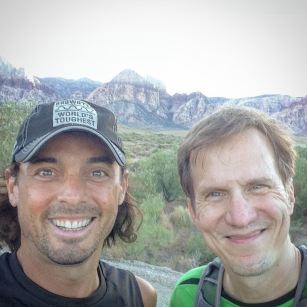 In a totally random coincidence, but friend Brad Lombardi is in town preparing for Badwater 135.  We headed out to Red Rocks in 100° weather to do a few miles.  Originally we talked about 13, but we got started late and it got dark.  That being said, I’m not sure what kind of shape I would have been after 13.  I felt find starting out even like we were running too slowly, but after about a mile, I felt like absolute garbage.  It was hard to pick up the pace, and every hill felt like a mountain.

This was a great visit to Vegas.  Now that I know about the Cyclone I’ll be back for sure.  And Red Rocks is a place I’m going to try to hit every trip.  All of these adventures require a rental car, which is something I basically have to eat. Lucky for me, in the middle of the summer rental cars – like human life – is pretty cheap here.

Red Rocks is a special place — we kept noticing how quiet it is. And during the summer, I imagine there are many fewer visitors, so there were fewer cars, no other runners (because they’re not insane) and

It was even nice running in almost the complete darkness.  It gets cooler by the minute as the sun goes down. I kept remembering that rattlesnakes are most active at dusk.  I guess I picked up my pace a little.

I’ve never been so good at running in the heat or at doing any sort of cross-training.  This week, at least, I got to do both! 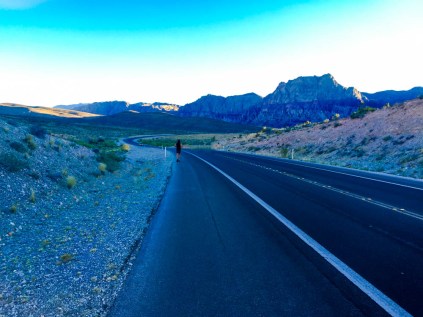 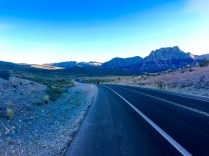 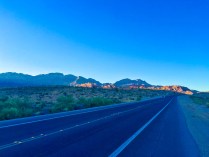 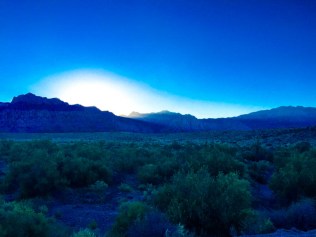 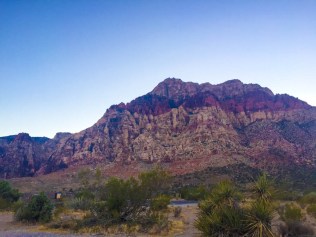 PREVIOUS POST ← Ten Things I learned at the Boston Marathon 2015
NEXT POST Well, at least it was a PR. →