Posted on June 21, 2012 by Greg Cohen under Uncategorized

Bill:  Well, you wanna be careful to not be a big baby about it.

I’ve been running in the Asics Gel Nimbus for about three years now, and I’ve loved them.  Well, I loved the 12s.  Skipped the 13.  Now am afraid of the 14s.

What the hell am I talking about?  For those folks who actually have a good relationship with shoes and maybe haven’t had their hearts broken by a running company, let me weave a tale of horror and woe.

Running shoe manufacturers seem to enjoy making me nuts.  More specifically, they seem to enjoy change.  I, on the other hand, fear change.  Every year or so, Asics insists on updating their running shoes to make them “better.”  I would like them to update them as well, in this case I mean “update”  as in “leave exactly the same.”  They seem unwilling to meet my half way, which I guess would be changing every kind of running shoe other than the one I happen to like. 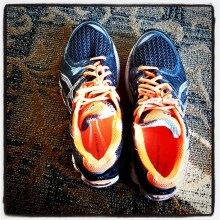 I loved the Nimbus 12, and owned about six pairs of them.  I wore them in Boston at least once.  I had so many pairs that I was able to skip the Nimbus 13.  Not that there was anything wrong with it.  I just never had to buy one.  So I stuck with my old shoes.   Which I loved.  We had a good thing going.  We gave each other space.  And yet were in a committed relationship.  It was like college, but with cleaner clothes.

But, like college, eventually our love came to an end.  My shoes were so old that it was time to get rid of them.  It was like it was graduation time, and I was going to get a job, and my shoes were going to go in the Peace Corps.  OK, this college metaphor is now so weak I’m going to abandon it.  Much like my shoes did to me.  I’m just saying.

I bought a pair of shoes.  Wore them for about 50 miles, and then they were great.  Then I went on a Trail Run in Arkansas (that should be the name of a band).  For the first time in my life I developed a blister.  It’s kind of on the side of my foot.  As were were running  I knew I was in trouble, but I thought to myself, self, just power through it.

So anyway, this blister is disgusting.  It got all bloody right away.  I tried taping it with everything from gaffers tape to first aid tape.  Ok, I guess those two things aren’t that different.  As I ran, the blister just didn’t go away.

I got back home (I was away for a couple of weeks), and like a drunk hunting around for the bottle of liquor hidden in his toilet, I went hunting for the old shoes.  And I found the liquor.  I mean the shoes.  And man, it was a great reunion.  The blister seems to be getting smaller.  Unfortunately, all the shoes are as well.  I have two pairs left, and they are worse for wear.

Today, I went to a new running store, The Bronxville Running Company, which was just awesome.  Rather then selling me new shoes, Josh suggested letting my feet heal completely, and then if that didn’t work come back and then we’d look for something new.  That’s awesome advice, and there’s no question I’ll go back there for my next pair of shoes.  I did, rest assured, buy a bunch of other running stuff I can’t afford.  I mean, it was a running store after all.  (ps Bronxville is an awesome town.  Starbucks and Frozen Yogurt.  How much better can it get than that?)

I’ve got a half marathon on Sunday.  I think I’m going to run in my racing flats.  Which have very few miles on them.  So I don’t imagine we’ll have to break up anytime soon.