One of my favorite things about running is that it provides the opportunity to complain about everything. This year, my complaint was primarily about a sunny day. I think the high was 75° or so, which sounds fantastic. Who doesn’t like a sunny day. Lots of sun. No clouds. Plenty of sun. Zero shade.  Awesome. So me and my running buddies were stressing about the weather. Or I was stressing about the weather and I was trying not to stress everyone out around me.

I planned to run with my friend Bénédicte, and we had talked — extensively — about pace. I also touched base with my coach Andrew Lemoncello, who felt that we were in good shape to run 7:30 pace which would be awesome. I ran a 7:37 average last year, my weight is a little lower and I thought I could do it.

But the heat was indeed something to obsess about. Even lining up for the start, it was clear it was going to be different. People weren’t throwing away clothes, everyone showed up with as little on as possible, because even standing around we were getting hot.

Here’s an awesome picture of us before the race. Aren’t we awesome? Great group. 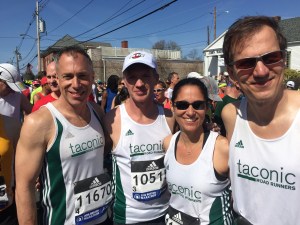 Then we started, and all of our plans kind of fell apart.

We were on track from the start, maybe a tad slow – the crowds in Boston are no joke, but as I’ve noted before, it’s still possible to run a great race without going nuts with the crowd. But with the nice day, it felt like there were more spectators and people seemed to be creeping onto the street a little bit.

I was worried I was holding Bénédicte back, but it was hard to get through the crowds. I asked her if she wanted to pick it up and she asked “do you?” and I responded “hell no!”  These are the things that great running conversations are made of. There is depth, nuance, negotiation, settlement.

And then Bénédicte said “I think I’m going to stop.”  She had been suffering from foot pain for the last six weeks or so, and now it was out of control. I never had a sign that she had been suffering at all – of course, maybe I just wasn’t paying attention.  This was her 4th Boston and her like 22nd marathon, and she’s never DNFd before, so the pain must have been massive. I thought she was joking. And usually I’m the joker.

She wished me luck. I didn’t really know what the etiquette was – do you try to talk your buddy out of dropping out? That sounds INSANE. I was a little listless at this point, I walked a few steps and luckily another Taconic, George, was right there behind me.  I held on to him for many miles.

The truth is we were both running slower than we thought – and once I got to the half at 1:40, I knew my chances of qualifying for next year were basically zero. My qualifying time is 3:25, and I’d need I think like a 3:20 to be sure to get in given that it’s getting tighter each year. I’d have to have run an even second half or a negative split to get in, and in that heat I just knew that wasn’t going to happen. 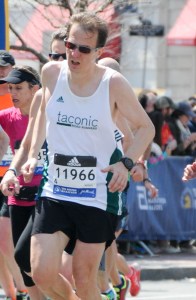 Then began a mental battle: I thought “just relax, enjoy the day, it’ll be great.” But then when I’d slow down I thought “This is a freaking race, give it all you have.” And then when I picked it up I thought of my friend Joe saying “live to fight another day.”  Then I’d slow down and think “you’re lucky to be here! Don’t disappoint the whole world!”

My buddy Paul jumped in the last 10k with me – he did it last year as well. My first words are “I’m suffering man,” but then I realized the suffering was basically mental. I was running slow, but I didn’t hurt per se. After heartbreak hill, I opened it up again and did have a 7:51 or so in mile 21, but I started to feel all this crazy lateral pain and slowed down again.

Even in the last miles, when I was hurting, it was kind of a hot, sticky mess kind of way. Not a lot of pain, but I felt, once again, like I was melting into the ground.

There was a lot online about the heat, here’s something from Let’s Run, which is usually a place for people to tell everyone they suck at running. A lot of people suffered, and out of my running club, there were only a couple who did anywhere close to where they wanted to be.

After the race I’ve done a lot of soul searching. And by “a lot” I mean “a little.” The truth is I put a lot of work into something that didn’t go so well, and after the race I felt like I wasn’t in any great rush to go back again. It’s crowded. It’s hot. There are some crazy hills.

But the truth is, it’s Boston. It’s the most storied marathon there is, and the next day I was hobbling around New York wearing my Boston shirt because I wanted everyone who gave a shit to know that I ran Boston. It’s pathetic because no one gives a shit, or two people give a shit, maybe three. 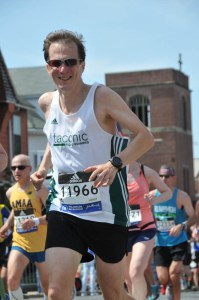 The art is in the qualifying, and finding marathon to run where I qualify seems inevitable. What I’m not going to do is try to qualify for 2017. I think some of my ambivalence about this year’s race was based on running it last year. I called my (faster) friend Greg and he agreed: “Sometimes streaks suck.” There is very little chance of my streaking at Boston, but I get it. Boston is so great, and to become familiar with it almost diminishes its greatness.

Then again, all my friends are in for for next year – not from Boston, but from other races. Crap, I hate to be left out! I’ll try to find a spring Marathon. Maybe.

Now it’s Saturday, and I’m walking normally again. I’m on a weekend away with my youngest daughter, and to keep myself from running I’ve left my running shorts at home. But I’m desperate to get out there and run again.

The marathon is never easy, and I’m still to find that runner’s high I’ve heard so much about. But I do truly feel blessed to train with great people and enjoyed getting to Boston. Being there was a little harder this year, but still.

Paul was an awesome pacer and he managed to shoot video of me crossing mile 25 with the Citgo sign in the background. If you watch the video I’ve edited in a little footage of me after the marathon. Talking about running. When Paul told me he was going to put a video online of me running I said “LET ME SEE IT FIRST” and he said “no, man, you look ok.” And it’s true, I can’t believe I’m actually running. Take a look, and remember this was at the end – when I was actually kind of happy. A resigned happy, but happy nonetheless.

Marathoning is weird. And hard. But now that a few weeks have gone by, I can’t wait to run another one.So I guess I did live to fight another day.

You looked great before the start!! Although I’m proud to say I’m now 0 for 3 spotting you running by me or if you count the three times you ran by me at Lowell a few years ago I’m 0 for 5. I’m excited about the next time to miss seeing running Greg but glad that I saw standing still Greg.