Posted on March 7, 2010 by Greg Cohen under Uncategorized 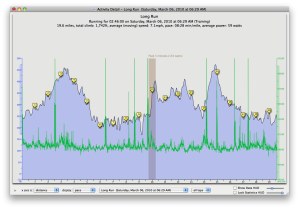 Because I ran a 25k last weekend, I’m actually a week late based on my Boston training, so I was anxious to get this one under my belt.  And man did it hurt.  I ran with some good friends and great runners.  Five of us met at 6:30am at our traditional starting point and hit the road.

Our route woud up behind pretty hilly, and I felt like we were hitting it hard and based on effort I though we’d have just slower than 8 minute pace.  It was actually 8:28, which was suprising.  But not nearly as suprprising at the climb in our route — 1,742 feet which is a lot!  The impossible 25k I did last weekend was only 1,400 feet of climb. No wonder I hurt so much.

I’ve got to think more about the elevation profile — Ascent calls it 1,742 but mapmyrun says it’s 597 feet.  But when I look at the elevation profile on either it seems that mapmyrun is just counting the gross climb and descent and not the net climb of each and every hill.  Complicated!  I was lucky to have my friends Guy, Karen and Ted  run the route and I’m sure between us was can figure out which is right; already writing the email.   Obsessive?  Nah, not me.

OK enough complaining — it was a great run, but it was tiring.  Towards the end of the run I was talking with Bill, who isn’t training for a marathon this time, but was still running hard.  “20 milers are the worst.  I think it’s worse than the marathon?”  I had to ask how that could be — “There’s no reward after a 20 miler.”  Good answer.  I rewarded myself with a nap before lunch, and then a nap after lunch.

I’ve posted the route so I can also put it on runner.org — it won’t mean much to folks who haven’t had the pleasure of doing this run, but I amazed at the hills.  It makes me feel much better about being sore.  But much worse about doing it again.