Posted on April 22, 2013 by Greg Cohen under Uncategorized

It’s been a hard week to be a runner.  Or a human being, for that matter.  These fucking asshole terrorists have forever associated one of the greatest running events in the world with an act of cowardice without parallel.  That a few fans standing on the street should give their lives as they cheer on their friends and neighbors reminds us all of the value of the gift of life and how precious each and every one of us is.  It’s hard for me to be as articulate as I’d like about this, but I did read something great that really hit home.  Please check out Erin Gloria Ryan’s blog post.  This will be the first and last time I ever link to Jezabel.

And now, for some running banter. 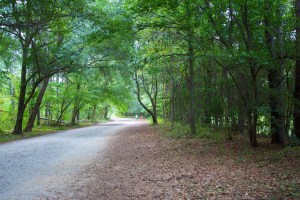 I’m in Atlanta this week, and I arrived yesterday at 10:30am with nothing to do.  I’m staying across from the Galleria, which isn’t a mall, but rather a convention center, across the street from a mall.  I researched where I’m staying, looking for places to run and alas it didn’t look so good.  There’s nothing around here but interstates and more malls, as far as I could tell from the map.  When checking in, though, the receptionist mentioned that there was a network of trails close by, a few miles, “but you have to drive there.”  I asked her to write down the name because I wasn’t quite sure how to spell “Chattahoochee”.

It turned out that it was a two mile run there, and it is a little rough.  Sidewalk for a while, but sidewalk along traffic buzzing by at 50 miles an hour.  Then a kind of sprint-or-die dash across an onramp, and then, wow, a great national park.

The area I was in is called Cochran Shoals, and the trail itself is only three miles long.  But at the end of it is a quiet residential street which goes another four miles or so. It was great, and there were a ton of other runners and walkers out there.  Most with great kids and friendly angelic golden retrievers.  OK, I may be seeing this run through rose colored glasses, but I started off thinking I was going to be breathing exhaust fumes and getting water at a truck stop, and I wound up having a great run.

I went really slow.  My watch was all sorts of messed up, but I can’t imagine I ran many sub-nine minute miles, but it really was great.  12 miles overall.  Of course, the last two were spent dodging the vehicular traffic again, and then I got back to the hotel.  I thought to myself “self, you should get some lunch.”  And what better place to get lunch than a freaking mall?  So I went to Subway.  Got a starbucks.  What a freaking great run.