Posted on January 3, 2014 by Greg Cohen under Uncategorized

I’ve been coming to Phoenix for years. I have family there, and honestly I think it’s a great place. I’m sure it’s a great place for a lot of things, but it’s an awesome place for running. For example, it’s really flat. Also, in the winter, the weather is outstanding (I understand that’s not the case in the summer. But let’s ignore that.). And there are great places to run. Like the Arizona Canal, which is a packed dirt trail next to water that goes seemingly forever. Sure, sometimes you have do dodge through four or five lanes of traffic screaming “DON’T HIT ME! I’M A RUNNER!!!” but you can get that in any city.

I have a great running friend here, Terri, who is always up for a jog with her slower visiting friend. I’ve hung her with and her husband Mark (from whom you should buy your Phoenix home, by the way) and she’s introduced me to a few other running buddies here. It’s a great community, and people seem really supportive of each other. We get that in New York, too, of course, but everyone just seems happier here. I’m sure I’m just reacting to not being cold or snowed in, but I find there is a warmed optimism that tints life here. Like cheese on a bagel. Which is gross. By the way.

I reached out to Terri and asked if there were any New Year’s day races that were worth doing. Last year I ran a four miler which I kind of enjoyed, mostly because I did a little better than I had any right to expect. She found a couple of 5ks, and although she didn’t want to run it (because she is smart) she agreed to get me in the last mile.

The race was super mellow. To this day, I’m not 100% sure what the name of the event is.  It was pretty clear that the race was informal, for example, they took down my home address and said they were going to mail tee shirts. Which seems highly unlikely, but maybe my cynicism is misplaced. I will blog more about my tee shirt when I get it.  But it pretty much started on time, they had food afterwards, so what could be better?  Marked miles, I guess.  But I’ll appreciate them more next time.

We met around 8 for a 9 start which was great. The sun was just coming up and it was about 45°.  The air was clear, the morning was fresh.  Everything was great.  Except for my running.  I felt like absolute dogshit even from the start.   My breathing was hard, and even the tiny little hill (incline? hill seems to not describe it well). I really have no idea why, but I couldn’t really get it in gear.

I had run a 19:35 in May, and a pretty good half in September. I’ve also got a friend who has taken me under his wing for coaching and he — who is also named Greg of course — has been getting me through a pretty good tempo run or two. He’s an awesome runner, and he has a great first name. I’ll call him “the other Greg” because to call him “the faster Greg” is a little depressing.

In talking to the faster other Greg, he suggested getting in under 20 minutes. I thought to myself — and unfortunately said out loud — that I could do well in this race. The weather is perfect. The community is supportive. And Terri was going to get me in the last mile. What could go wrong?

Terry asked me how quickly I wanted to run the last mile. I said a bunch of stuff that I’ve tried to block out of my head as they were clearly the ravings of a lunatic. Words like “six ten”. Or maybe even “around 6.” Insanity.

The other Greg had suggested going out in a 6:20 and taking it easy for the first mile and then seeing how I did. Terri agreed. 6:20 sounded great to me. It would be a great chance for for me to really hold back. See what it was like to leave something in the tank.
At the first mile, I was lapped at 6:24. And the only thing I was keeping in my tank was the powerbar I had for breakfast. And I wasn’t sure I it was staying there. Or anything else. Maybe I’m not being clear. I felt like dogshit. Slow dogshit. Dogshit that had gone out seemingly too fast but apparently too slow based on my watch. D-o-g-s-h-i-t.

The other Greg pointed out that the second mile in a 5k is the worst. It’s the worst mile in running. It shouldn’t be hard. Only one mile in! But one mile after pushing as hard as a distance runner can push. And you’re not half way through. I did the second mile in 6:32. How freaking depressing. 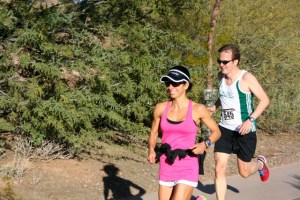 Smiling because it’s almost over

Mile 3 Terri was there waiting for me. Any initial relief I had by seeing her was followed by the crushing realization that she was going to make me run faster. She was encouraging (“you’re doing great.” “it’s totally fine to throw up.”  “no one has noticed you’re crying.”).  What blew is that despite the encouragement I felt like I had no more to give. I picked it up a little bit every once in a while, but in the end I was having trouble pushing it even realizing that the end was near. With less than a half mile to go Mark got a bunch of pictures of us which are universally indicative of how crappy I felt.

I finished in 20:06. Which is 7 seconds slower than I time I would have been thrilled with. So right next to thrilling is misery. What an awesome hobby.

That being said, I did learn a lot. I feel, once again, that losing ten pounds would do an amazing amount for my running. I really need to stop eating everything I see. Also, I need to keep training with (the other) Greg. And I need to keep racing to see how I can better control how I feel at the start. It’s not like I’ve been doing anything that different in terms of what I eat or how I train, but I feel like if I make some positive changes I can have a better chance of putting in some better times.

There is some icing on the cake. I did wind up coming in first in my division, which is amazing and did give me a big emotional lift. I really do only race against myself, but when I am so unhappy with myself it helps to beat everyone else. That sounds a little less charitable that I’d like.

I’ve picked a spring marathon — I’ll be running the Pocono Mountain Run For The Red marathon on May 18th. It’s a little late in the year for the weather to be anything other than risky, but it’s got some great reviews online and (the other) Greg will run the second half with me. So that’ll be great.

I’m now in Vegas for a few days. The weather is still great, but it’s not nearly as good for running as Phoenix. That being said, I’m happy to get out a few more days before I return home to the cold.

So I guess I’d summarize by saying I had the best time possible running a crappy time in a race. Hopefully it’ll lead to better things in the future and won’t be a harbinger of a miserable year of running. But if it is, rest assured I will bitch about it both in person and via the internet. Because that’s what the internet is for. No?  Happy New Year.