Posted on October 6, 2012 by Greg Cohen under Uncategorized

Remember a few years back when everyone was saying “It’s all good?”  People would say it to anything.

“Mike, how was that trip to see your mom?”

“Oh, I thought I heard she was in the hospital?”

“I thought she regained consciousness for a moment only tell you she was ashamed you were her son.”

My friend John is in the habit of saying “it can’t all be good.  If it was, we wouldn’t need the word.”  Meaning everything can’t be good or there is no good.  There has got to be some shitty or there can’t be pretty.  You gotta get some flack, or you can’t give back.  OK, this is getting a little weak.

Runners are an enthusiastic bunch.  We are thrilled to get up in the morning and run in the rain. Lose a nail?  Awesome!  Hardcore.  Have to crap in the woods? Right of passage.  Don’t finish a race?  It’s better to DNF than DNS (that’s “do not start” which I’m pretty sure have never appeared on a race results page anywhere).

That being said, we are also a self depreciating bunch.  We often are the first to criticize ourselves (“I might have well stopped at for lunch I ran that race so slowly.  Then again, I’ve put on so much weight, I didn’t need anther meal”).

In my blogging, I may hedge a little to the self-deprecating side rather than being as enthusiastic as I might, but overall the long run is something I look forward to.  I love putting in the miles, feeling like I’m working towards an important (and hopefully long-off goal) and sometimes even see something new.

Yesterday, I should have been able to do all three.  I’ve just arrived in Singapore, a place I’ve never been.  We had no work on the day of our arrival, and I had a 20 miler on my schedule and I was really looking forward to it.  I know, it’s crazy to run 20 miles after 24 hours on a plane, but I’ve got a marathon coming up, and I thought what better way to see a city.

I emailed a friend a friend who suggested I got to Macritchie reservoir park and run three looops.  I should have taken a cab and her suggestion.  Instead, I decided to run to the park.  Through the streets of this very clean but unambiguously Asian city.  In this case “Asian” is being inappropriately to mean “under construction with plenty of traffic.”  Also, the cars run on the left, as we are a former British colony of course, so I actually had to stop at all the crosswalks because I was so afraid of getting killed.  Also, I’m sure if you jaywalk you can get a ticket (the US State Department says you can get arrested for it).

Another important thing to know about Singapore — and something that everyone tells you if you only have ears to listen, is that it is HOT and HUMID here.  365 days a year.  like 85° with 90% humidity.  Nice.

I’m staying on the island of Sentosa, which is a resort island which is kind of like, er, it’s like the resort areas of Walt Disney World without as many cars, but with way more people.  Like Disney, sidewalks are few and far between.  I ran to the bridge which takes you off the island and into the city, and couldn’t actually find the pedestrian path. So I ran against traffic, which since I’m an idiot, was actually with traffic.  Apparently, communicating to runners via the horn of your car is a universal method of discourse.

After getting over the bridge, I was at the staff exit of the shipping yard.  Which was apparently having a shift change.  I wanted for the first of many lights, crosses the street, breathed some truck exhaust and was on my way.

So my run wasn’t, I’m sorry to say, all good.  It took forever (I left at 9:30 and I think I was back in the room just before 2).  I had to stop about 50 times for lights.  And I had to stop and go into six different 7-Elevens to buy more water for my fuel belt, buy gatorade as I felt like I was needing a shitload of gatorade, and stand for a minute in the AC. 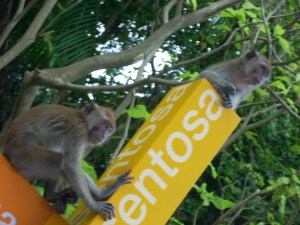 That being said, I did see some cool things.  A big group of monkeys.  Really.  Monkeys.  Here’s a picture.  These weren’t the monkey I saw, but they looked just like them.  I also saw many other runners, which is always great.  I know I’m going to have some good runs while I’m here, but I think they’re going to involve getting in a cab or on the subway and going to one of the places that are recommended.  Butching it through the streets is not good.  It can’t all be good.

It’s now Sunday morning, I’m going to go out and do an hour.  I think I’ll stay on the Island.  Oh, wait, is that thunder I hear?  Awesome!  Now I have to look up paces for the treadmill in kilometers rather than miles.  It’s all good.