Posted on October 26, 2014 by Greg Cohen under Uncategorized

I’m the first to complain about running in Las Vegas.  Although I love working here, it can be hard to grind out miles on the strip at any time — in the morning, there are drunks and whores.  The rest of the day, just tons and tons of people.  I’ve blogged about it. That makes it real..

But yesterday, I went out to Red Rocks for the first time and it was fantastic.  I’ve not done a lot of trail running, but my colleague Paul does it all the time.  He’s from Park City and we’re headed there after our project there and will get in some miles. 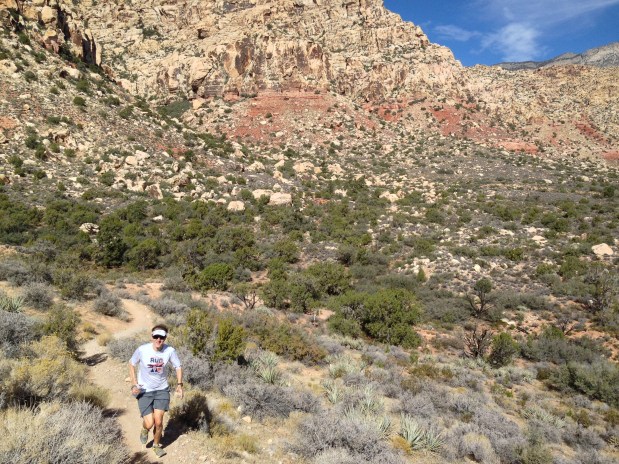 We found an article on Runner’s World and also asked around.  We chose the Grand Circle Trail, which 11.5 miles or so.  We asked for help finding it at the visitors center, and the volunteer there was absolutely fantastic.  She sent us off to run counter-clockwise, which was great, as we got the big climbs out of the way in the first half of the run.

Trail running, as I mentioned, is pretty new to me, but I did buy a water bottle to carry around, so I did kind of look like a trail runner.  That was cool.  I only had my regular shoes though, so I was quite concerned about snapping my foot off.  Something new to worry  about.  I didn’t fall, but I did twist my ankle a couple of times.  But no real damage.  My buddy Paul took a spill and cut himself up (see for yourself!) but he’s come back strong.

But it was so worth it; great great views, challenging climbs, but then a long downhill

I had no idea how fast (or, it turns out, slow) we would run.  We averaged 11 minute miles but it felt like we were working really hard.  The whole rest of the day I was sore, but in a totally different way than usual.  It really rocked.

I can’t wait to get back there.  I’m hoping we can get back out there this week.  The only real issue I can see is there is no way to get there without a rental car, which typically I don’t get when working on the strip.  We wound up renting one from the hotel, but it was like $100 with gas.

I am so happy to learn that there is so much more to this place.  Next stop Hoover Dam!