I had the best race of my life at the Run for the Red Marathon. And today, as proud as I am of myself, I find myself keenly aware that I got to this point through the help of others.  And that feels great.  Although I worked hard, I am so very lucky to have the great support of those that got me here.

This time I splurged on an online coach, and Greg McMillan’s Andrew Lemoncello was perfect for me. He gave me a plan every month and was really helpful when things went well. He  was also great when things fell apart.

I had one particularly wretched speed-workout on the West Side highway a few weeks ago. It was meant to be tempo intervals, but it turned into a series of stops in wretched porta-potties, with a turnaround into an early spring New York rain. That could do nothing to mask my tears. Andrew reminded me of earlier workouts that had gone well, that I needed to rest, and basically just to get over myself. It was what I needed to hear then. And always.

I also had a great friend in local running rockstar Greg Diamond, who did a ton of workouts with me; gave me great advice and most importantly ran the second half of the marathon with me. He also recruited another local running legend, Jennifer Latham, to run the first half. Greg’s wife Nancy came to the race as well, and ran a killer 5k. I basically had to do nothing but run.

I picked the Run for the Red Marathon a few years ago — it’s very close to Croton, just a two hour drive, and there is an incredibly high number of Boston qualifying times run there. It’s also a small race — 800 people this year. No big group at the start, no throwing elbows.  It was on May 18th, and that’s a little late to expect cool weather.  It turned out to be perfect, 45° at the start.

I wanted to get into Boston this year — I needed a 3:25 to qualify.  After talking with Greg Diamond and using the McMilian running calculator, it felt like a 3:15 was within reach.  I made the questionable decision to tell people that’s what I was trying for.  Which is scary as my failure was going to be very public.  But I figured if I was going to give it my all, with a couple of top notch pacers with me, there was no point in keeping it a secret.

The race is run very very well.  Well staffed water stops.  Street closures.  Most importantly:  there were porta-potties at the start with no line.  I shit you not.  Ok, maybe not the best choice of words.  But no lines! And the high school was open before the race so we could all sit around on the floor in a nice warm building rather than sitting outside on damp grass.  Not that I won’t be thrilled to be doing that in Boston.  But I’m just saying.

We shuffled off to the start, which was super mellow as well.  Jenn and I hung out at the start and we were probably only 20′ back from the mats. There really is nothing like a small race; it felt like a big group run, lots of smiles all around. National anthem. and we’re off.

The course is a massive net downhill, with the bulk of the downhills in the first half. It was hard to be sure of what a great strategy for pacing would be. Many many people, including Greg McMillian, have said again and again that most runners are best served by running a marathon evenly — every mile about the same pace. For me to get my 3:15, I’d need to run 7:24 average. The problem is that with the downhills it’s hard to stick to that. I didn’t want to “break” or hold back, which anecdotally I think causes quad pain later in the race.

And we had some fast miles — there was a 7:03 in there. But it felt relaxed, and I wasn’t breathing hard. Jenn was a blast to run with, we talked. We didn’t talk. We made fun of other runners. We made fun of ourselves. At one point a guy who had with us opened up on a downhill, passing us in what looked like 6 minute pace. “I’m letting my quads go!!!!” he exclaimed as we went by. Not really sure what the hell he was talking about.  Never saw that guy again.

The first half went by quickly. I knew that a lot could still go wrong, but Jenn had set me up perfectly because nothing had gone wrong yet. Had I blown it out in the first half I never would have been able to fix it later. I did the first have in 1:36:29, a perfect split would have been 1:37:30, so I was right there, a minute fast but with the downhills it felt about right.

It was time to say goodbye to Jenn; she planned to join Greg and I for the last mile. I knew the first half was going to be the fun part of the race, and it was fun.  Pain was to follow.

The first half of the marathon is hardly half the work; mentally I think it’s about a third. I remember feeling like this in other marathons — I am anxious to get to the 20 mile mark and then seen how I feel. That’s where I always fall apart, traditionally runners hit the wall between 18 and 22 miles. I mentioned this to Greg and he said “just get to 22 miles. I always tell myself I can do anything for four miles.”  Yeah.  Like have a cardiac event.  For example.

We did great up to and including 22 miles — super-even. Greg couldn’t have done more for me. He would grab water in a bottle from the water stops and hand it to me. He carried gel. This is all legal, I’m told, as I wasn’t going to win the marathon. He was a rockstar.

I tried to pick it up on a hill; he said “slow down. You’ve got plenty of time in the bank. Don’t exhaust yourself on the hills.  You’ll never get that energy back.”  Just hearing that made it easier to relax a little.

On another hill I felt like I could go stronger and said “Should we pick it up a little bit,” and he said “you’re joking right?”

We talked about the advantage of running the tangents, which basically means not adding extra distance by going the wide way around any turn.  At one point, the course jogged left then right, and at the left, I started to cut the turn short, which wasn’t cutting any distance as I was going to just have to go right again.  “If you do that again I’m going to get mad,” warned Greg.  Total rockstar.

He was great. And I felt great. At mile 20 Greg said “we need to run 7:33 pace or better for the next six miles and you’ll get your 3:15.” He somehow can do this in his head. “That’s almost too much information,” I responded, and I did start to freak out a little bit. Of course we kept hitting the numbers.

But then it hit — I think it was around mile 24, I started to feel like every quarter mile was taking too long and everything hurt. Side stitch. Calf pain. General feeling of malaise. OK, no malaise. But that’s a good word.

We picked up Jenn and I told her I wasn’t doing so well. “YES YOU ARE!” Greg corrected. These people are awesome. But I was slowing down. 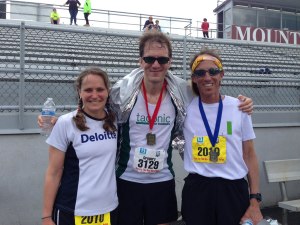 Together after the end

The last 1/4 mile or so is on the track, and there is a lot of jogging of the route to get the runners lined up with the track entrance. We pulled a quick left and a felt a sharp pain in my side and I took a step to walk. Greg grabbed my elbow and said “None of that!” and we kept running. “I have a side stitch. Really bad,” I exclaimed like a whiny child. “If you have a side stitch, switch your weight to the other foot.” “That doesn’t make any sense,” I thought. But I tried it. And it worked.

One jog around the track and we were done. 3:14:31 according to my watch… a little better officially. Man I felt great.  Well, I felt horrible at the time.  But I am so so happy.

I learned so much on this race — the training was great because I had a great plan from McMillian and Coach Lemoncello. But I think so much of the thanks has to go to Jenn and Greg Diamond for pacing me, and also to Greg himself for giving me such great advice during training.

I took water at every water stop and I think that helped. I also took a 100 calorie gel every four miles, which felt good. I don’t know why I fell apart at the end but I think it shows I gave it my all. Next time maybe a little more gel. Salt tablets. People are talking about salt tablets.

Although I am super thankful to Greg and Jenn for getting me through the day itself, they are in a very real sense representative of the larger running community who gets us all to the starting line. I am lucky. Through and through.

Lucky I have a great running club to run with on Saturday and talk to all the time.

Lucky I have colleagues like Paul who put in some serious miles with me on the road.

Lucky that I found a great running friend in Terri to get me through my first 20 miler this year and find some great races for me in Phoenix.

Lucky I have a family that looks the other way as I run out the door.

Lucky I have two great friends to run with me on a downhill course on May 18th.

Lucky I am runner still.

I am thankful for all of this, and so so happy with this marathon.