Posted on January 25, 2010 by Greg Cohen under Uncategorized

Had a great run yesterday at the Manhattan Half Marathon, which traditionally has been a race plagued by horrible weather.  Yesterday it was almost 40° at the start, with overcast skies but no rain.  It was great.

I had been nervous about this race because it’s so early in my training for Boston; there’s still 11 weeks or so to go, and I’ve only done 3 speed workouts.  I wanted to run well, and of course avoid injury, and in the end I was very happy.

I have a constant internal debate about races while in training.  Most of my friends in the Taconic Road Runners seem to be of the old school, in that a race is a race and you’re to push it as hard as you can.  I remember last summer talking to someone who was about five weeks away from running the New York marathon.  She was talking about a half that weekend, and I asked “Are you going to race it all out?” to which she replied “As opposed to what?”.  I realized then that the whole deferring energy for a targeted race weeks away was not a given.  Many many people felt when you show up on the starting line, you  show up to race, not to to do a tempo run.

So much of the quality of the run was based on being in a good corral, something with which I’ve had trouble in the past. 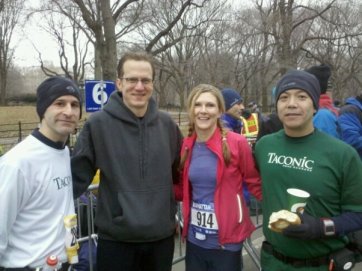 I was very happy, to be sure. But it was also awesome that so many of my team-mates did well.   And wrote some great race reports!

I’m very frustrated with not being able to get a perma-link to race results at NYRR, but I have to point out that Cathrine Wolden came in first in her age with a freakin’ fantastic time of 1:26:17. Here’s a post race picture, left to right, fellow Taconics Stu Weitzman, your humble if out of uniform writer, Cathrine Wolden and Eliot Lee.  The picture was taken by Grenier.