Posted on January 7, 2013 by Greg Cohen under Uncategorized

A couple of months ago, I ran the Philly marathon.  I was happy with my run there.  But all my races leading up to Philly kind of blew.  I really did only once race once I started training, and it was a half marathon in which I proved that flying back from Singapore and running two loops of central park in the heat is not the greatest path to happiness.

Since Philly, I’ve been relaxing, cutting back on my milage mostly because of schedule, but also because I was getting a little burned out.  I have a couple of great loops from my house, but I feel like I’ve run every one of those great loops about a million times.  Every curve, every hill, every mile.  A million times.  So it’s been harder to get out there.

I’ve also not been hitting the track…  I mean, it’s the freaking winter.  Ug.  So many excuses.

That being said, I do feel like a little down time can lead to better training when I start up again.  That’s my story and I’m sticking to it.

So, with my low milage and lack of serious workouts, I decided to run a race.  I was hanging out with a bunch of runners talking about the future, and someone mentioned that there was a 4 miler on New Year’s Day.  The rumors were varied but not ambiguous   the course was a hard one, hilly.

The race was the Run for Sight in Brookfield, Connecticut.  The drive is about an hour from my home, so I was happy to find that two buddies, Tim and Michael, we willing to do the drive.  Sitting in the car for two hours to run for less than half an hour is not the greatest sitting to running ratio, after all.  And the race was New Year’s Day.  New Year’s Eve claimed Michael, so it was just Tim and I for the drive.  We drank coffee and talking about our hopes and fears.  Hope:  not falling apart in the race.  Fears:  Crapping ourselves during the race.  Typical runner discussions. 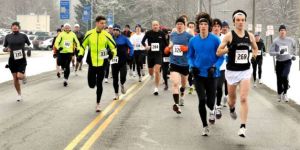 I am not in this picture

It was just under 40°, but there was a wretched wind blowing.  Pre-race the high school was open for registration, so we could wait for the start in relative warmth.  Saw fellow Taconics Carol, Tom and Bob and talked through the course.  The run starts with a rough downhill, so Bob’s advice was to open it up for the first half mine, put some speed in the bank so with the uphills wouldn’t be quite as detrimental.  I like a good down hill as much as the next runner, so I was all for it.

Tim and I did a mile or two warm up, which was great.  It was cold as crap at this point, so I was glad to get out in there and suffer a little before the race.  It’s a nice small race, and everyone was flashing a smile of painful recognition beforehand.

The race started right on time, headed downhill as advertised and then up a rather forgiving uphill.  No one seemed to mention that uphill.  That being said, I got in a pretty good lap in 6:27.

Mile 2.  Ug.  Hills.  Tim, the guy I drove with, is a great runner and typically kills me in races.  He’s so far ahead of me, he’s like a rumor.  But I could tell how serious the hills were because he and I were doing them together.  Both suffering.  Very serious.  Mile 2 we did in a freaking 7:09.  Not so good.

At this point we both picked it up, and we seemed to be doing a lot of running with a third guy, a guy who seemed like he was a little bit older than us.  He was doing great, we were reeling him in, he’d pass us.  I realized that holding on to this guy was going to be the key to me doing OK in the race.

I think I have a problem when I have a bad split.  I get too easily disheartened and resign myself to a slower pace than I might otherwise run.  But with Tim and this other guy, I could just hold on to them and do keep pounding away.

I feel like all summer I proved my ability to run one shitty race after another, but this one felt good.  I ran a four miler in 6:33 in 2010, but I was in way better shape then.

I guess the takeaway here is that I need to not let myself lose heart after a bad mile — and to look around to people to be inspired by to keep up the pace.  The problem is that training is often done alone, and I’ve got no one to hold on to.  I’ve got to keep training so I can keep writing positive posts.  Because no one wants to read a blog about some guy bitching about bad races.  No one.