Posted on April 8, 2014 by Greg Cohen under Race Report

I’m back in Phoenix, a place I love.  Mostly because of the running.  Sunny.  Flat.  I guess it can get hot.  But for now, after the winter we’ve had in New York, I am thrilled to to be here.  My Phoenix running BFF Terri (from whom you should buy a house) found a race for me to run.  Which is great.  Because what’s better than racing when you’re out of town?  Nothing!

Run the Runway takes place at the  Scottsdale airport.  On a runway.

I was a little concerned about many things.  First, and foremost, was how freaking boring the course was going to be.  Although in a perfect would I could entertain myself with the voices in my head, I do like a little scenery.  Maybe a hill or two.  OK, no hills.  Well, downhills.

Terri also pointed out that there would be zero shade.  And that last year it was very very hot.  Hot.  No shade. 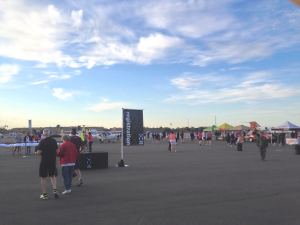 The race is unique — it’s an airport that is closed for just one morning.   It’s cool — you park at the airport, walk into the terminal, and then out onto the tarmac to register.  I spend my life in airports, but very little time with my feet on the runway, so it was pretty special.  They put out a bunch of planes and helicopters.  They all look the same to me, but still.

I was way too early.  My nerves started to come into play, so I used the porta-potty three times (TMI?) and got in a 10 minute warm up.  Everyone had to hang out in the tarmac area until right before the race.  We were then all released to the runway, to the starting line.  Everyone seemed to know each other,  and everyone looked pretty fast.  I asked if the miles were going to be marked — I  couldn’t imagine painting mile markers on a runway.  No one knew.  So I let my garmin auto-lap, because why not?

My only real desire was to run a little better than I did at the Sleepy Hollow half marathon two weeks ago.  McMillian had be down for a 41:49…. but since the course was flat, I just had to do better than that.

Here’s what I learned.

It’s all about the sun.

When the sun was behind me I ran way better than when it was in my eyes.  Simple right? 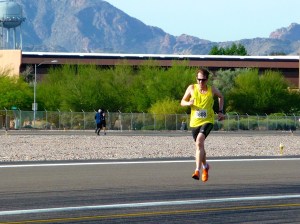 Sad face running into the sun

The race started with the sun behind us, down to the end of the tarmac.  Felt pretty good, crowd was pretty thick.  Then we turned around and ran into the sun.  Hot.  Shitty.  Mile one, sun behind me 6:33.  Mile two, sun in front of me 6:49.  But something happened in Mile 2.  I realized there were very few people in front of me.  Like six people.  Then this guy passed me with a dog.  The dog was fast as shit.  The guy was too.

I turned the corner and was running with the sun behind me.  I passed some people.  Then one more guy.  He said “good job.”  I said “what about the 5k?  Aren’t we going to have to deal with those guys?”

See there was a 5k as well.  They started 15 minutes after us.  Their first finishers would be well ahead of ours (say 15 minutes delay +16 minutes of amazing running = they’d finish 31 minutes into the 10k).  But the problem is the slowest 5ks we’d be lapping.  We’d be running up their rears to finish the race.

In any other race, this would be a huge problem, but the thing is runways are very very wide — so it was super easy to get around them.  But it didn’t help me mentally.  There I was in mile 4 of a 10k thinking “put the hammer down, hold on, do something.  don’t slow down.  just keep running.”  And all around me there were people pushing strollers and kids out for a walk.  There were people talking on the phone.  I think I did a 6:58 or something.  Not so good.  But I knew I had to turn around once and then be done with it — I’d have a mile or so to go, straight away, sun to my back.  So I did.  And I did have something left.  Last mile was a 6:26.  I tried to finish strong and Terri got some great finish line pictures.  You get a sense of my amazing speed.  And the 5k runners/walkers around me. 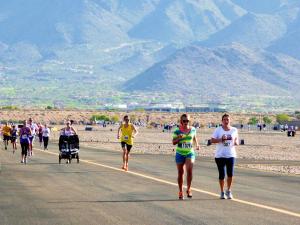 Finishing 4th. Amongst the 5k walkers!

I am a little sad that effectively I let myself get distracted by the walkers.  It was just disheartening to not have anyone to hold on to (whomever was in front of me I couldn’t see because of all the walkers) but I just need to work on that, run the race inside my head regardless of what’s going on around me.

The results were an absolute mess afterwards, they lost a bunch of times or chip reads.  But everyone was really great about it, and it was a festive mood afterwards.  I didn’t pick up my award, but I still had a great time.

So what have we learned?  The sun matters.  There is absolutely no shade on a runway. And it feels good to be 4th.

Congratulations dude! Were there any other old folks in the three ahead of you or did you dominate your age group?

Interesting difference with the sun being at your back and in front of you. Well done though a PR is not to be sniffed at.

Now you have to come back next year to better your time!! As always, great to spend some time with you and already looking forward to your next visit!