Training has been going well — I’ve been very happy with some of my speed workouts, I’ve gotten a long run or two in, but I’ve not raced since a badly measured 5k over a month ago.  I was anxious to see how I was going to do in a longer race, and what better opportunity than a relentless half marathon.

I ran the inaugural year of the Sleepy Hollow half marathon in 2011.  I did pretty well — heck, I think it was my PR at the time.  This is a notorious course, there’s a rumor that Jim Gerweck, race director of the never-flat Boston Build Up series designed it.  I’m not quite sure how I ran it well three years ago, but the fact that I had a good time under my belt made today’s race more intimidating that I would have liked.

My pre-race stress was based on having a shitty day and then realizing my fitness was off and then becoming so depressed that I quit running.  Not really.  But really.  The anxiety was over the top — it felt like a marathon inside my stomach.  I couldn’t get the rough course out of my head.  I took some comfort in that the route had been changed.  Maybe it would be easier.  Or different.  But there was no question that it was not going to be flat. 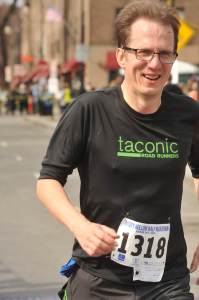 My friend Jin was running and we talked about running together and holding a seven minute pace.  This worked out great for me at the Dutchess half last fall when I PRd on Jin’s heels.  By heels, I mean he was about a minute in front of me. But we worked together for a lot of the race.

Today it wasn’t to be.  Things started off well.  I manually lapped, which maybe doesn’t make so much sense in a smaller race as many of the mile markers were a little off (of course, you can only complain about miles if they’re short), but I felt we kept everything around 7 minutes through the first two miles.

At mile three, there was quite a freaking hill (Mountain?  what makes a hill a mountain?), and I really had to struggle to hold on.  Jin opened it up a little bit and I fell off the back.  I was fine with it — my friend and awesome runner Gregg Diamond had texted me before the race “Run your own race,” and there’s no question my own race had nothing to do with Jin’s!

That being said, I held on to him, falling back 100 meters or so (see, meters!  Like the track!), but then catching up around mile 5 or so.  I think we ran together until mile 9, and then I just felt slow.

With the first half uphill, the second half is  net downhill, and it was fun to open it up. At mile 9, there was a smiling volunteer who said “Ok, turn here onto the trail!  Up the hill!!!!”.

At first I was like “trail, this is great.  I love running on trails.”  But I fall apart racing on trails because I have no freaking confidence.  Also: hill.  And it wasn’t a packed dirt trail.  It was a brick path.  Then a dirt trail.  It blew.  7:51.  Suck it trails.

Towards the end, so many people were passing me I felt like I was standing still as a bunch of people got off the subway with my back to them.

But I knew I was pushing hard — looking at the stats my heart rate stayed up the whole time.  I was working.  Just wasn’t loving the results.

As I was falling apart after mile 9, I kept thinking to myself “self, there is a lesson here.”  I’m not sure what it is.  Oh, yeah, sometimes racing sucks.  Also: lose some freaking weight.  I think with this training plan it’s really the best thing I can do for myself.  I get back from these runs and I just want to eat everything.  And I do.

This was a tough run, but it’s a great course.  The only thing that broke up the pain was that things changed again and again.