Posted on September 17, 2013 by Greg Cohen under Race Report 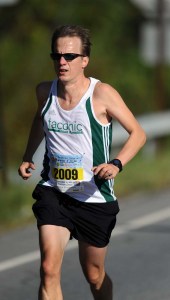 Racing is a gamble.  Anything can go wrong.  It can rain.  You can be hungover.  It can be hot.  It can rain, you can be hungover, and it can be hot.  You can eat a bad piece of tuna.  Hell, you can eat a good piece of Tuna and still have to step off the course in the middle of the run.  Anything is possible.  Thinking about all the things that can go wrong, as far as I know, has never helped a runner run one second faster.  Fighting this anxiety is something I’m working on, and, I have to say, don’t seem to be getting good at.

For this year’s Dutchess County Half, I was relatively free of pre-race anxiety except that I was quite anxious to not do the race.  My training has been off, I’ve got a lot of personal stuff going on, and I feel like I had no freaking interest at all in running a half marathon.  Which, if memory serves, is quite long.  I’ve run this race twice before, and the last time — in 2010 — I burned out at the end.  I even blogged about it.  Not to give myself any undue advantage I of course didn’t read that blog post before running this year.  Very smart.

Last year, I ran Gretta’s Great gallop, a half in Central Park, and was as miserable as I’ve ever been.  That was two long loops of central park, I was just off the plane from freaking Singapore (bad running town because of weather alone), and every mile felt like more a chore than the last.  I tried to go under 1:30, which was freaking nuts.  I ran a 1:38 something and hated it.

I’ve been in Chicago for the past week, and the running there was fantastic.  Everyone seems to be in great great shape, all running along Lake Shore Drive in their pace teams, with their mid-western smiles and down to earth strides.  It made my race lead up a lot easier, because it was easy to hold on to my pace.  I ran 14 miles the Saturday before the half, taking a nice two hours to do it.  I wound up feeling OK, so I had a little bit of confidence.

My friend Gregg needed a 1:32 to qualify for the local elite start in the New York marathon, and my friend Jin and I agreed to try to get him to that number.  I’ve mentioned Jin before — he’s a great runner, super even, and I’ve often regretted races where I didn’t match my pace to him.  Or keep up with him.  Or even keen in him my sight from afar.

The event is a great — it starts out of a high school and there is plenty of parking and it’s festive environment.  The Taconics set up a tent with some drinks and a little food after the race.  I thought I had per-registered, but I hadn’t, and registering onsite took all of 35 seconds.  Gotta love that.  Cost $40.  Awesomeness. 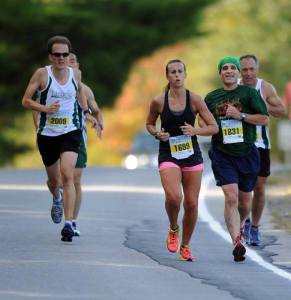 We caught up to a few women in the second mile — Kristy and Jean, who run with Orange County Runners.  After a few grunts, we confirmed we were all running around 7 minute pace, and then we had a freaking pace team.  We held it together for most of the race, and it was great.  There wasn’t a lot of talking, but the occasional disparaging comment about how bad we’re feeling goes a long way to kill the time.

This is a beautiful course; there’s farms and cows and barns and fences.  There’s also strip malls and road traffic, but only for part of it, but by and large it’s fantastic.  I think it was 50° at the start, which was amazing weather

We were feeling great, I think all of us.  Another guy named Dave joined us, and he seemed anxious to push the pace.  He was running well, then at the nine mile mark he said “wow, I think that was my 15k PR.”  That’s not so much what you want to hear — and indeed, he backed off and slowed down.

I felt like in the last 5k maybe I could open it up a little, finish with a great time.  I didn’t feel I could go under 90 minutes, but I felt I was running well.  Then at the 10 mile mark (which is, amazingly, 5k to go), the wheels kind of fell off.  I couldn’t push any harder, and the miles seemed to come a lot less often.

Jin was doing great, and he did push hard.  I held on for a little bit, then let him go. 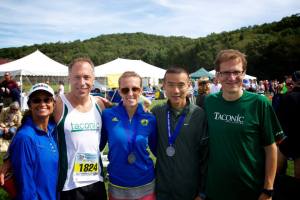 It’s amazing how crappy I felt during those last three miles.  I kept looking at my watch thinking things like “30 more seconds and we’ll be half way through this mile.  30 seconds is like a quarter of a lap.  Wait, is that right?  Man, this sucks.”  When you’re parsing out comfort in 30 second increments you know you’re fucked.

Finally, I could see the finish and there were a bunch of Taconics screaming.  I broke into a big grin.  “THERE’S NO SMILING!  PUSH IT!” I hear, or thought I hard.

I felt great, I was freaking thrilled.  It was great to feel good through the first ten miles — the last 5k totally blew.  But it really was because of the people I was running with.  I’m now facebook friends with Jean and Kristen, and hopefully we can run together again.  I know Gregg, Jin and I will run together again and I think we make a good team.  When you feel like crap, there is nothing like seeing your buddies pushing hard.

I signed up for the Ridgefield Half on 10/6 — I’m hoping to get some folks to run it with me.  It’s funny how I changed from hating half marathons to looking forward to the next one.  I think I’m better, at least mentally, when I have a little while to work into the pain.  The blow out of a 5k is over fast, but if you have a bad first mile it totally blows.  In a half, you can have a bad mile or two or final 5k and still feel out.

After the race I got a trophy, which was awesome.  I took a bunch of pictures and put them on the Taconic site; my friend Bill got a good shot of me.  The team did well; my friend John came in 3rd overall in the half, and our teammate Tom won the 5k overall with a 16:10.

Bringing a trophy home is nice and the kids loved it.  They didn’t seem to want me to take it in to restaurants or to meet their teachers at back to school night.  Strange.

Monday I couldn’t run at all, today I did a slow two and a half miles.  This could be a problem. I’m going to have to pick up my mileage, I have a half marathon in a few weeks. 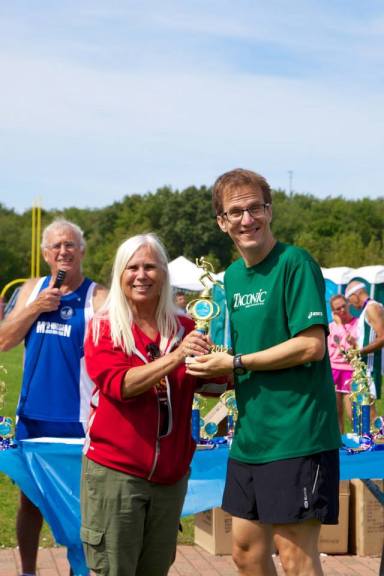