Posted on September 25, 2013 by Greg Cohen under Uncategorized

I wanted to run Boston.  The bombing last year made we want to want it even more.  I wasn’t the only one.   Even given the more difficult standards imposed, and the fact that I’ve aged into a new division, I missed it.  I missed it by 20 seconds.

The hows and whys of the mechanics of qualifying for Boston and how they decided who got in and who didn’t are too obscure for me to detail (and they are described on the web, of course).  But I feel it was fair, and the people who did get in did run faster than I did.

I’m bummed though.  There is nothing like Boston.  I’ve run it twice, and I was hoping to run it again.

Part of running is admitting you’re trying.  That you’re setting a goal.  That you’re executing on a plan.  The emotional capital I invested means that it’s hard to just shrug off today.  But I am hardly alone, and there are many great runners who are excluded from  this year for any number of reasons.  Many friends made it this year, many didn’t.  And although I won’t be at the start, my heart will be with everyone who is running.  I’m proud to be part of the running community, and because of last year’s Boston, the community will be out in full force this year.

It sucks to not get in, but I’m still going to try for next year.  Hell, I’m going to go for a run for an hour today — that’s what I do.  Runners are nothing if not persistent, and there’s some comfort in that. 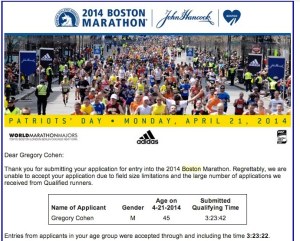