Ten Things I learned at the Boston Marathon 2015

I know it comes as a great surprise, but I spend a great deal of time on the Internet. And one thing that I’ve noticed that’s become increasingly popular is the use of listicle, which aren’t really articles, they’re just lists. You know, like Buzzfeed. Everyone loves the Buzzfeed. No? Anyway, moving on.

So let’s see what’s so appealing about these listicles (spoiler alert: easier to write).

Here’s what I learned in Boston this year.

For the first time, I wasn’t stressed out of my mind until the a few days before the race. In fact, for a little while, I thought I had the whole stress thing mastered, and maybe – just maybe – I could get to the starting line without questioning my value as a human being.

I, of course, can’t keep my mouth shut, so I told everyone how little stress I was feeling. My friend John – a great runner as well as a great friend – totally understood about my lack of stress.

“John, I’m worried that I’m not stressed out about that race enough.”

“That is a problem. I can help with that.”

He posted a great series of Facebook pictures, you know like images about the weather. Which wasn’t looking so good.  He also posted an image showing the elevation from mile 16 on.  Which is rough. 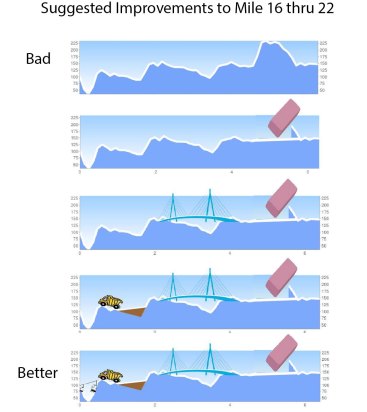 Actually the elevation image got a lot of hate on Facebook, so John had a series of improvements to the route which he suggested over the next several days.  I’ve consolidated them.

I didn’t start to totally fall apart until Thursday (Boston is on a Monday). And even as the weather started to get worse and worse, I didn’t worry about it.

And in the end, I did OK. I ran a 3:20, which is five minutes slower than I ran last year on a much flatter course, and a minute slower than my last Boston, but because I didn’t kill myself mentally on the front end I was able to let go and just enjoy the race. A tiny bit.

It’s true. I’ve run in some bullshit before. I ran the infamous Bay State marathon of 2009, where the temperature never got above 35° and it rained the whole freaking time. And this winter was hard – many long runs in the snow, rain, wind, etc. 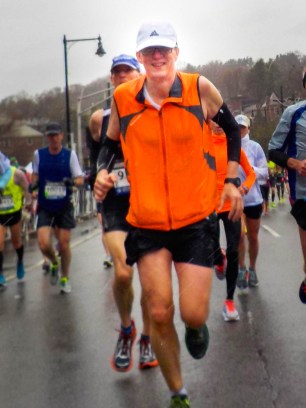 But Boston this year was pretty rough. Winds of up to 25 mph and rain. Temperature was around 45 I think. It felt super cold.

But that wind combined with the rain was intense. I’m not sure when it started raining, but the whole second half we were in the thick of it. The wind was straight out of the east, and it turns out that the marathon runs east. Pretty much the entire time.

I can’t really tell how much the weather affected us all – and there is no question misery loves company. It was easier to get through the race surrounded by so many people. Everyone was putting up with the same crap, and that was no small amount of comfort.

The race sucked for everyone. There is no one amongst my friends who did better than their expectations or even, as far as I know, met their goal. I was hoping to do a 3:15, and felt like I gave it all at 3:20.

In mile 1 I realized my left shoe wasn’t as tight as I would have liked. I thought to myself, “self, WTF? How many times a day do you tie your shoes? And you can’t get it right? Sabotage! You are trying to sabotage your race! There is nothing we can do about it now, self, you’re going to get a blister in mile sixteen, soak your shoes with blood, what a specimen you’ll be. Can you die of a blister? Your family will be very proud.”

But then I thought “self, just stop and tie your shoe. You’re in freaking mile one. You’ll make it up.”

And I did. I tied my shoe. Started running. My mile was a little slow, but all for the best.

Then, a couple of miles later, I realized my right shoe could have been tighter. And I kid of had to take a leak. “Self, well, since you’re pretty much just run-walking this race after the last shoelace incident, let’s stop in a portapotty. It’ll be great.”

And it was great. I had a nice pee (TMI? Too late now!). Tied the crap out of my other shoe (not literally. There is, alas, no crap in this story) and was happily on my way.

So let’s say I lost 90 seconds to my messing around, maybe two minutes. I’m not sure that was the end of the world. I know I felt better both in my feet and in my, er, middle parts.

I regret nothing! Nothing! Well, except I wish I had tied my shoes better at the start. That’s a lesson learned. Who knew?

4. Take it easy on the hills

I learned this last year from my friend Greg Diamond. Another awesome runner. He got me through my last marathon and told me to relax on the hills because I’d never make up the effort of pushing it. And that’s one thing I did differently this year. In 2011, I pushed hard on the hills, but by the end of the race I felt like dropping out. We had heavy tail winds and I still only ran a minute faster. This year easy up meant I could go faster down. And had something left at the end. 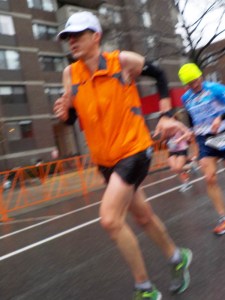 John Reumann’s facebook posts reveal an important strategy: the race begins at mile 16, where you face three hills, the final of which is so shitty we call it heartbreak. The entire race I was relaxing knowing that the battle to come was way more important than early skirmishes. And even at my slow pace, that totally helped.

Mentally I think it’s important to breakup any marathon into phases, and I guess my phases are before 16, the fires of hell, and then getting to the finish.

Next year, I want to train harder on hills so even when I’m not killing myself I can maybe do a little better. I feel like I lost a lot of those hills, but I was able to make up a little bit afterwards.

It’s not like I was a gazelle after mile 22. I was hurting. Quad pain. Shin pain. No aerobic pain, but everything else hurt.  But although I couldn’t run any harder going up hill, but at least on flat and downhill I could push.

Everything about this trip was awesome socially. I drove up with the Reumanns and had a blast. There is nothing more entertaining than other people’s kids. We rocked out in the back and watched Netflix. I wouldn’t have thought the 9-year-old would have been into Orange is the new Black but she is now! (Just kidding John and Liz).

I stayed with my long friends Sal and Demetra, who are awesome hosts and we had many meals and many laughs.

And my buddy Paul and his wife Rachel came out as well. Paul ran the last 10k with me which was huge.  He took a bunch of shots on the world’s smallest camera and even a couple of videos.  He deserves credit for all photos on this page, and for being an awesome running buddy.

And I stayed two nights with Sal, so I was in Boston for a day longer. I’ve always hoped in the past to mitigate stress by staying at home as long as possible before a race, but getting used to being out-of-town and spending a little time enjoying the city-wide celebration was awesome.

7.   Avoid the athlete’s village if possible

Liz dropped us off at the start so we didn’t have to take the school busses from downtown. Which was great. But you know what else we didn’t have to do? Go to the athlete’s village, a shantytown of anxiety and a petri dish for digestive disease. Should everything fall into place in the same way next year, I’m hoping to hang out in town itself without going to the village. Nothing good happens there.

8.  There are a lot of runners. But they are all runners.

Boston is crowded the entire race. I was never alone. But everyone is freaking moving. No problem holding on to a pace. It’s pretty amazing.

I can’t thank my coach, Andrew Lemoncello and his boss Greg McMillan for all of their help and guidance.  I had the great pleasure of meeting Greg the day before the marathon, and he offered awesome pacing advice.  There’s no question that my confidence was boosted every step of the way by their plan, and I am grateful.

This is the first marathon I’ve run without doing a half beforehand, am I’m glad I didn’t.  The only half I could have done with my stupid work schedule is crazy hilly and I’ve had shitty times there before.  It was also supposed to snow.  My coach said skip it.  And I did!

Turning down Boylston I knew I wanted to take a mental – not physical – pause and remember the act of terrorism that destroyed so many lives only 24 months ago. I know where at least the second bomb was, and I wanted to take a look at the crowd gathered there, today as before, standing without fear to do nothing more than cheer thirty thousand crazed runners finishing their race.

I looked at the finish line, and that replaced any sadness or mourning. I couldn’t think of anything more than getting there as quickly as I could, to put one foot in front of another, and push hard. Work my arms. Forget the pain.

It was hardly a momentous tribute to anything, and running always falls so short of whatever metaphor we try to cast upon it.   But ultimately it was the best I could do, finish the race as best I could, get across the line.

I am thankful for the support of my friends and family, and for the larger running community that makes Boston so important for us all.  I overqualified by over four minutes, which hopefully will get me a bib in next year. There is nothing like Boston. I’m not sure why, but like so many runners before me, I am desperate to come back.

Fantastic blog Greg! So glad we were there to support!