Posted on November 18, 2012 by Greg Cohen under Race Report

The first rule of marathoning is don’t do anything new on race day.  Don’t try a new gadget to massage your muscles or modify your nutrition.  Not that anyone would, but don’t modify your stride or try a new kind of shoe.  These rules are set in stone and are non-negotiable.

Have a bad marathon?  The community with gather round with love and support.  Unless they fail the first round of questions:  “you didn’t do anything new on race day did you?  Wait, you switched shampoos?  And you normally don’t shower before your long runs.  Man, you are lucky you’re not dead.  I’m surprised the sweep bus didn’t pick you up and drop you off at stupidville.  Everyone knows not to change anything on race day.”

Another thing that is constant is that for every runner, and at every marathon, is that in order to pick up your race bib you have to cross through the freaking super mall of running gear known as the expo.

At the expo, you can get not only new clothes, new shoes, new gel, but you can attend seminars where people tell you to run differently (mid strike!  barefoot!  bike!).  You are supposed to stoically turn aside from the salespeople.  “Wow, I’ve always wanted to try ‘crack’, your brand of gel, but you know I’m not going to use this tomorrow!”

“Yes, Bart Yasso, you’ve coached thousands of runners, but anything you say to me I’m going to ignore because I can’t take your advice as I am running a marathon tomorrow.  And your marathoning advice must be categorically ignored.  Because it has been written. So say we all.”

So I went to the expo at the Philly expo last night prepared to ignore everything.  I was to pick up my number, maybe buy some gel — of the brand I’ve always used before — and get the hell out.  But I did one to check in with the pace teams, to see what the deal.

A pace team is a group of runners who meet at a marathon and line up with a team leader.  This leader, presumably, has run many many marathons at a much faster pace than the team’s target.  The leader wears a GPS, and runs even splits and gets everyone on the team to their target time.  Well, everyone who doesn’t fall off the back, or abandon the team.

I’ve never done a pace team before.  In Boston, as far as I know, the marathon is way too hard core to have pace teams.  We Boston runners just know our pace by feel and can just go out and hit even splits for a marathon.  Or 50 miles.  Or whatever.

But I’ve always wanted to run with a team.  I look at my watch way too much, and stress when I’m off pace or on pace or too fast or two slow.  So I was thrilled to see that Cliff Bars were organizing a team.

I was thrilled!  I could run much slower than I had planned.  Maybe enjoy the marathon instead of trying to kill myself the entire way.

So I showed up today, found the 3:25 team leader — a great guy named Mike, holding a sign that said “3:25” with three helium balloons.  He had to run with those balloons and that sign for the entire race.

I hung out with him a few minutes before the race, and he got asked the same questions again and again.  Let me recall them:  “what pace is a 3:25?  Are you running evenly?  How do you handle water stops?”  Answers:  7:49.  Even.  We slow down but don’t stop.  I suggested he start to make things up.  Like tell people he ran positive splits (meaning he ran the first half of the race faster.)  Say things like “I like to go out at 6:15, then fall apart. ”  He told me that humor was a lot more welcome at the expo, but in the corral people seem to have less of a sense of humor. 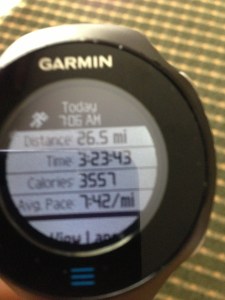 It’s hard to find people who will say bad things about Philadelphia.  They out on a great race.  The volunteers were fantastic.  The course is pretty flat.  And the town comes out in force.

We’ve all put up with a lot for New York Road Runners recently, and in Philly, it’s just hard to not be in love with the race organizers   There seems to be no layer of bullshit.  After the debacle of the cancellation of New York this year, Philly actually welcomed thousands of runners into their race.  This is after they were previously sold out.

So, here comes a complaint:  it was crowded out there.  Now, I was running with the pace team, so we do cluster together, but people were throwing elbows, tripping, etc.  It was freaking crowded.

OK, back to the positive.

It became more like a long run then a race.  It’s just a different dynamic — I had an objective, to run at that number.  I held on to the dude with the balloons, and all was going to be good.

I hoped to pick it up after 20 miles, to see what I had and to, ultimately  run my own race.   But we ran a really slow mile 18 — an 8:28, and I started to flip out a little bit.  I realized that the pace team came with no guarantees, and I better pick it up a little earlier to make sure I got it in time.

I’m sure I’ve written about this before, but a runner I know and respect — let’s call her Jenn Latham — gave me a great strategy for  marathons, let’s call it 10, 10, 10.  Which is, take it easy for the first 10 miles, just relax.  For the second ten miles, hold on to what you have, and then for the last 10k, open it up.

Philly really impressed me — in a lot of ways, it’s like New York without all the bullshit. I stayed in a hotel 10 minutes from the start, I was in the corral 30 minutes before the start and I was like the firs tone there.    The course is good.  There is some weirdness (the half marathons start at the same time with the full, the second half sometimes has out and backs that were clearly in pace just to add miles).  But it’s a great time and I really recommend the race.

In a way it was a gateway drug into Boston for me, which feels a little weird.  I did what I wanted to today, but I’m not sure I gave it my all.  I’m fine with that as long as I then give it my all in my next race, or the race after that — I just want to make sure I’m not become so set on say hitting Boston that I’m not relaxing too much.

So I guess that’s why I want to do other things, like, heaven forbid, a tri.  Maybe drowning in the middle of a town lake somewhere will make me understand the importance of road racing.

But for now, I’m just going to keep taking Advil and wait for the official results to be posted.  Maybe find out what it takes to lead a pace team.  It was a great day, but like any great day of running, it’s certainly a lot greater in retrospect.