Posted on September 13, 2015 by Greg Cohen under Race Report

I’m just now back from running the 5th Avenue Mile, which is a race the New York Road Runners have been doing since 1982.  It’s a great run from 79th street to 59th street, right along 5th avenue (kinda all there in the name).  There’s prize money and a professional field, so turnout for this race is understandably high.

I’ve never raced a mile before, so I really didn’t know what to expect.  I knew I had to push it hard, and we got some great advice on the Taconic site from our coach, which basically comes down to take it easy for the first 400, then open it up.  At least that’s what I took from it. 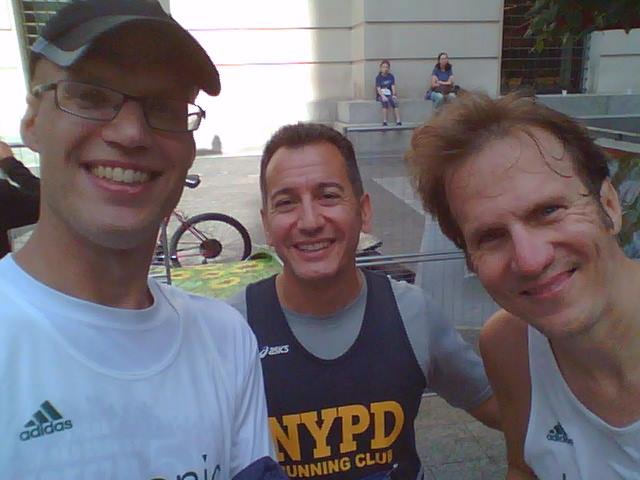 Getting to the city was pretty stressful — the one major endurance event that happens in my hometown is the Toughman Triathlon, which by all accounts is a great great race.  It causes a few road closures though, so I started out early and headed out with plenty of time to spare.  I had a hell of a time finding a space in the city and wound up pulling into a lot which was so freaking expensive I don’t even dare post it here.

I got to the start, picked up my number, and went to warm up.  I ran into a great Taconic, Martin Fitzgerald, who gave me some great advice as well.  “You’re going to suffer at the end no matter what.”  He has a fantastic Irish accent which is perfect for say words like “suffer.”   It’s an anaerobic, lactic event — you push yourself hard and there’s no good way to beat the pain.

And suffer I did — I lined up with Gregg Schroko, a runner who gets better with each passing year.  He encouraged me to really push to the front as we lined up and that was great advice.  As soon as the gun went off, Gregg was off.  I was off too.  Just a little farther behind him than I wanted!

I wanted nothing more than to get under 6 minutes.  And at the 400 mark I was right where I wanted to be.  But the slight uphill in the second quarter really slowed me down, and Strava says I was at like a ten minute pace for a second.  I do find that hard to believe.  At the 1200m mark I was on pace for a 6:14, and I did manage to pick it up at the end for a 6:08.

There’s not too much to be happy about here.  I’ve gotten my weight down to 178, which better than the 183 I weighed in July, but good grief it’s slow going.

I will say that I did run as hard as I could — sometimes in a race I feel myself backing off and have to think “push it, you slow bastard!” but this time I never felt like I wasn’t giving it my all.  The mile is intense.  It’s over before you know it, so there’s no time to relax.

I’ve been training hard for the Dutchess County Classic half marathon which is next Sunday.  I dare say I’m better at running a half than a mile, but let’s see what happens.

It was great to see everyone at the race, but the 5th avenue setup makes hanging out before and after a little more difficult than a typical NYRR race.  I love the running community, but this time with the wave starts, and a mile distance between the start and the finish, the community felt a bit distant.  Literally.

Fellow Taconic Kevin got a great shot of Nick and I — Nick is a Taconic but a retired NYPD detective, and he was running, rightfully, with their team today.  It was great to see two smiling faces at the end of the race.  My smile, although not warranted by my time, is heart-felt!