Posted on October 15, 2012 by Greg Cohen under Race Report

I’m back from my trip to Singapore.  I did sleep on the plane, watched some movie about aliens or maybe it was Woody Allen, really it was hard to tell.  That being said, even though I slept, I am as jetlagged as ever, and feel as if day is night and night is day.  Literally.  And in this case I’m using “literally” literally.  So there.

I’ve also developed some sort of head cold.  My colleague in Singapore said “oh, yeah, there’s a cold going around.  Everyone has it.”  That my cold is shared with an entire city-state is cold comfort indeed.

I had Grete’s Great Gallop on my calendar.  That’s code for a two loop half marathon in Central Park.  I felt so crappy yesterday that I considered not doing it.  But we all knew that wasn’t for real.  Of course I was going to do it.  I imagined tears running down my face from fatigue, snot rockets before the race, maybe some digestive distress.  So much to look forward to.

My training has been going pretty well, although I’ve been on the low end of my milage targets, I’ve tried to keep the speed work up while traveling.  And I’ve been hitting the target paces in training runs.  Again, what could go wrong?

I showed up at the race, and the park was already crowded.  It was a 10:30 start, which is pretty late — I think this is because there  were so many other events in the park that day.  I wound up seeing a bunch of people before the race, made it to the porta-potty and then realized I had about 5 minutes before the gun.  That was cutting it a little close because they close the corrals at some point before the start, and if you’re not in your assigned coral you’re totally screwed.  It’s happened to me. So I ran to the start, arrived at the first corral and the marshal looked at my number and said “you’re late.”  And then stepped out of the way to let me in.  I then kissed him.  We’re now dating.  That’s another story.

I listed to Mary Whittenberg give her pre-race speech.  She was in the paper yesetrday in an article with some fairly critical comments directed her way.  She was all smiles though, and the race got off without any booing or throwing of used gel packets, or whatever runners would do to extress distain.

I went into the race knowing I was a little sick and a lot tired, so I tried to have no expectations whatsoever.

I saw my teammate Joe at the start, he said he was going to try to do a 1:30, which is faster than I’ve ever run a half.  I asked if I could hold onto him for at least the first few miles, promising to keep my mouth shut and not tell jokes.  He was cool with that (I imagine he wanted to see if I could actually keep my mouth shut), and off we went.

I guess I thought I could run a good pace for a while and maybe get lucky.  It’s the “maybe get lucky” thing I have to watch out for.  I should have started at 7:15 pace since I knew I felt like crap.  What the hell was I thinking?  If I say I’m going to have no expectations for a race, I think lining up with someone running a pace that would get me a PR was Not.  Very.  Smart.

Mentally, I was already starting to feel shaky.  The biggest problem with the central park loop is that I’ve run it so many times.   I know it — the good parts and the bad.  In a 10k, you run it once, so you conquor each hill, speed through the flats, wait for the downhills.  But you do all that once.  In a half marathon, you do it twice.   Well, twice plus an additional 1.2 miles just in case you weren’t bored enough.

That being said, it’s a good course — plenty to see.  The park was, indeed, crowded  and the runners were all kind of squished together.  There were a couple of elbows thrown, and anger directed between runners.  It does seem that most anger is directed towards runners who are wearing headphones — one woman, enjoying her no doubt rocking tunes, complained to a man that he should be more careful.  He suggested she not wear headphones, concentrate on her race, and keep her comments to herself.  It’s a friendly sport.

I actually walked for 10 seconds in mile 11.  Thinking that may help — like if I just relax for a minute, so much the better.  No better.

So then I thought to myself “self, just think of this as a nice Sunday run.  Don’t stress about it.  No one is judging you but you.  You slow fuck.”

I realized that I did feel like crap, that I had just been half way around the world and was living in a different timezone, that I should just relax.  So I did.  And ran.  I ran with others.  Then the others passed me.  I ran with new others.  They passed me as well.  Ah, passers.

On south drive  it was crazy crowded.  Because it was two loops, the slower runners with among the faster runners who were lapping them.  And then there were also non-racing runners.  And, in the opposing traffic seemed to be an endless run of horse drawn carriages.  So there I was, contemplating my shitty race, smelling horse fumes, and loving life. 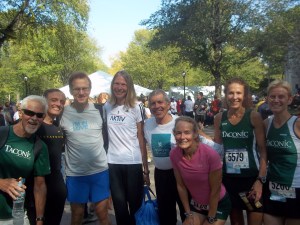 So happy it’s over

But it’s all just pathetic — I felt like crap, I shouldn’t beat myself up.  But I guess I wonder what’s the point of running a race if you feel like crap.  It’s so hard to detach from the emotion of doing shitty, and just thinking of it as a training run.

I’m a little down today.  I have about five weeks until Philly, and I’m going to redouble my efforts to keep my milage up and keep working hard.  I am sure my race yesterday isn’t indicative of my fitness.  But it’s hard to shake a crappy race, and the fact that I may not race again until Philly is no comfort.